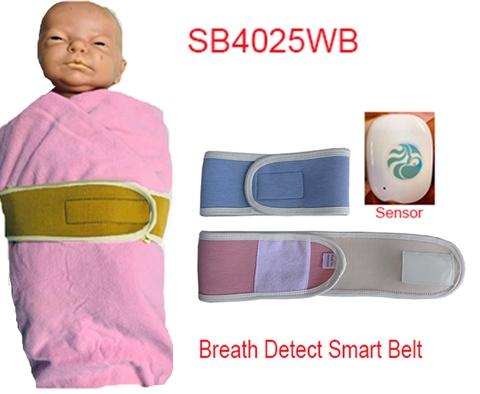 Model No.
SB4025WB
Made in
Taiwan
Supplier
SADUH INDUSTRIES CO., LTD.More About This Product
Discount Price
Price
Request for Quotation

This It is a baby smart belt Baby Smart Belt

Products introduction:This It is a baby smart belt.
The baby smart belt we invented is a kind of baby breathing induction belt that can transmit the baby's breathing state to the nursing station and mother's mobile phone. The obstetrics and gynecology nursing station in Taipei has begun to use the baby smart belt to monitor the breathing state of newborn babies.
How to use:
First put this breathing belt under the baby's body, fix it in a good position between the belly button and the diaphragm, and sense the baby's breathing. .
Then, take the sensor, press down the red dot of the sensor, it will turn into a red light, when the red light turns to green, it has been turned on, and then the green light flashes once and again, indicating that the system is running.
You put this sensor flat upward, put it in the breathing belt, and then wrap it between the baby's belly button and the diaphragm, so that you can sense the baby's breath, in the nursing station and mother's mobile phone, the Baby breath can be found recording.
Safe to use & Sensor can be recharged.
Our Baby smart belt use a low-power sensor, therefore no radiation problem. The baby smart belt can be washed.
Last Update : 2020-10-12