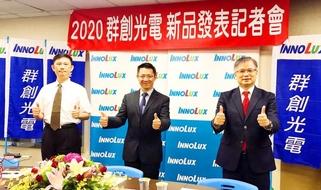 LCD panel maker Innolux Corp recently said its operations are to improve further this quarter from last quarter, benefiting from resilient demand for flat panels used in tablets, laptops and TVs as the COVID-19 pandemic keeps workers and students at home.
Work-from-home and online learning trends have helped stimulate demand for panels for laptops in particular and helped advance Innolux’s ranking to the world’s second-biggest supplier of notebook panels last month, the company said.
Shipments last month increased 1.5 times compared with the same period last year, it said.
“The stay-at-home economy is stimulating demand. Millions of schoolchildren need tablets to study online. Employees need laptops and bigger monitors for Web conferences,” Innolux president James Yang told a media briefing in Miaoli.
“Demand for smaller-sized TVs is also on the rise,” Yang said.
Even demand for panels used in vehicles is rebounding from a slump in the first half, as a growing number of people feel that driving is safer than using public transportation amid the pandemic, Yang said.
The company’s operation “hit the bottom in the first quarter and started warming up in the second quarter. The third quarter will be a better season,” he said. “Order visibility for certain products continues into the fourth quarter.”
The company’s net loss narrowed to US$162 million in the April-to-June quarter, compared with a net loss of NT$5.2 billion in the first quarter.
The steady growth in demand would not be just a short-term phenomenon, Innolux chairman Jim Hung said.
“The pandemic has changed how people work, entertain and study, and people are doing all those things online now. There will be no return to the pre-COVID-19 status,” Hung said. “We believe this should be sustainable demand and that the fundamentals of the LCD industry have changed.”
Innolux is also adjusting its strategy to match those changes, he said.
The Miaoli-based firm added touch features to an ordinary display mounting for fitness equipment to track physical activity and health data.
Demand for such displays has tripled this year from last year amid growing health consciousness, it said.
Innolux also showcased its latest display products, including a 55-inch rollable miniLED TV display.
The panel maker said flexible displays, which are less than 1mm thick, are suitable for public displays and advertising.
MiniLED displays are next-generation technology that would replace costly OLED technology, as their manufacturing costs and scalability are better, the company said.
Its new miniLED displays are to start generating revenue in the first quarter of next year, it said.
Source: Taipei Times
Kai Chiu (kai@taitra.org.tw)