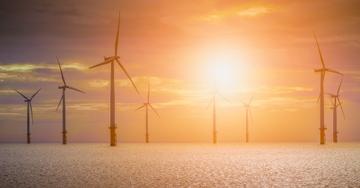 Taiwan’s market-leading chip-manufacturer Taiwan Semiconductor Manufacturing Company (TSMC) announced recently that it has signed a 20-year corporate power purchase agreement with Danish power company Ørsted. TSMC will purchase the entire productive capacity of two Ørsted wind farms, Greater Changhua 2b & 4, amounting to 920 megawatts (MW). Ørsted said the agreement is the world’s largest of its kind.
The electricity produced by the Greater Changhua 2b & 4 wind farms is expected to hit the grid by 2026. The 20 year agreement includes a fixed price TSMC will pay for electricity generated by the wind farms.
Ørsted has five wind farms in Taiwan. One off the coast of Miaoli, known as Formosa 1, came on line at the end of 2019. There are four wind farms off of the coast of Changhua. Changhua-1 and 2a, not a part of the TSMC deal, are scheduled to be operational by the end of 2022.
Ørsted said that in signing this agreement with TSMC they could guarantee their prices, which surpasses the cost of obtaining the permission to build the wind farms. Ørsted had paid NT$2,548 per MWh in their winning bid. Their press release noted that the agreement contributes to the financial stability of the two wind farms and “helps Ørsted mature Greater Changhua 2b & 4 towards a final investment decision.”
TSMC’s long-term goal is to use 100 percent renewable energy
TSMC couched the decision as “responding to the global call for carbon reduction and further putting green manufacturing into practice.” The company’s power purchasing agreements for renewable energy will total 1.2 gigawatts after the agreement.
The agreement comes on the heels of TSMC’s announcement that it would establish a US$1.2 billion factory in Arizona. A participant in Taiwan’s Ministry of Economic Affairs’ “green power purchasing program” from 2015 to 2017, TSMC is Taiwan’s largest purchaser of clean energy. TSMC's statement said that currently its overseas sites are 100 percent reliant on clean energy.
2020 has been dubbed “the year when Taiwan’s renewable energy market really takes off.” As the green power market has opened up from the clutches of traditional monopolist Taipower, new buyers and sellers of green energy have entered the stage.  It is estimated that TSMC purchases of renewable energy will approach 110 million kilowatt-hours in total.
Executive Vice President and CEO of Ørsted Offshore Martin Neubert praised TSMC for taking the lead in renewable energy sourcing and for "taking tangible action to deliver on their ambitious greenhouse gas reduction targets." Neubert also called the agreement “unprecedented,” demonstrating TSMC’s strong support for renewable energy.
As green energy is on the rise internationally, many companies have signed voluntary commitments to use 100 percent renewable energy as part of the “RE100” initiative. Google, Facebook, Apple, Microsoft, are all RE100 members. Taiwanese companies like TCI, 3dL Group, cosmetics brand O’right, and health foods brand Grape King are signatories to the RE100 pledge. Although TSMC maintains “a long-term goal of supplying 100 percent of its power” from renewable sources, TSMC is not an RE100 company.
Source: The News Lens
Wayne Lin (waynelin@taitra.org.tw)