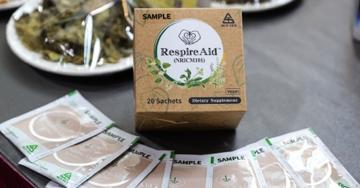 A modified version of a Taiwan-developed herbal medicine against COVID-19 is being touted as capable of bringing down fatality rates by 50% in patients with severe symptoms.
The NRICM101 regimen developed by the National Research Institute of Chinese Medicine (NRICM) in 2020 and granted emergency authorization use in May this year is mainly used to treat mild and moderate cases.
The NRICM102, with a twist in the formula, helps relieve breathing problems and boost immunity for seriously ill patients, according to UDN.
The exact ingredients of the herbal compound cannot be revealed as it has not yet been patented, said NRICM. The governmental institute will prioritize local pharmaceuticals for mass production of the COVID-19 drug.
The modified version costs roughly the same as its predecessor, the NRICM101, which is priced between US$110 (NT$3,055) and US$120 per course.
Containing ten herbs such as mint, the Chinese skullcap herb, houttuynia, and licorice, the NRICM101 has been shown effective in cutting the likelihood of patients being intubated or admitted to intensive care units by 80%. The data is based on a study of the drug’s use in 15 hospitals in Taiwan, per UDN.
A total of eight Taiwan-based pharmaceuticals have been authorized to make and distribute the NRICM101 overseas, according to NRICM.
Source: Taiwan News
Iris Yu (iris.yu@taitra.org.tw)