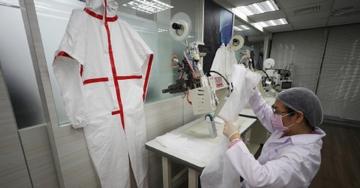 Several companies in Taiwan's textile sector have been modifying their production lines and ramping up output to help meet the soaring demand for surgical masks and other personal protective equipment (PPE) amid the COVID-19 coronavirus pandemic.
Among the companies that have stepped up to the challenge is a "national team" of six manufacturers, which are producing protective hospital gowns that have P3 particulate filters.
Leading the team is Makalot Industrial, a top Taiwanese manufacturer that normally supplies textiles to global clothing brands but has moved quickly into the production of special protective gowns for people on the frontlines of the fight against COVID-19.
Makalot Industrial Chairman Chou Li-ping said the company had the advantage of research and development conducted 17 years ago when the severe acute respiratory syndrome (SARS) epidemic hit Taiwan.
At that time, he said, Taiwan was importing most of its protective hospital gowns, and the government began encouraging domestic manufacture of PPE.
Against that backdrop, Makalot Industrial filed an application in 2003 for license to manufacture protective gowns, a product it had never made before, Chou said.
The company's research team came up with a design, which it patented three months later, according to Liao Pai-jung, a project manager at Makalot Industrial's innovation center.
The company was about to present its research and development results when the World Health Organization declared that the SARS outbreak had been contained, and Taiwan was removed from the list of affected areas on July 5, 2003, Liao said.
This time around, with the outbreak of COVID-19, Makalot Industrial decided to lead a "national team" to domestically produce protective and isolation gowns, according to Chou, who noted that the disease, which is caused by the severe acute respiratory syndrome coronavirus 2 (SARS-CoV-2) that was first detected in China late last year.
Makalot Industrial made that decision within minutes of receiving a phone call from the Ministry of Economic Affairs on the matter, Chou said.
The company is now on schedule to domestically produce 100,000 protective gowns by late April and is aiming to manufacture another 220,000 at its factory in Vietnam, he said.
Makalot Industrial also plans to set up a production line in Chiayi in southern Taiwan, which will manufacture 10,000 gowns per month initially and gradually increase its monthly output to 50,000, Chou said.
In the critical battle against COVID-19, Makalot Industrial, Eclat Textile and four other manufacturers on the "national team" have been contracted by the government to deliver 1.1 million isolation and protective hospital gowns by April.
Meanwhile, Kang Na Hsiung Enterprise, a manufacturer of hygiene products and synthetic textiles, has revived its production lines for meltblown nonwovens -- the main raw material used to make surgical masks -- which had been mothballed for at least five years.
Since the Taiwan government took the step of requisitioning all domestically produced surgical masks, Kang Na Hsiung Enterprise said, it has ramped up its daily production of meltblown nonwovens to 2.4 tonnes, which can make more than 3 million face masks.
With the ready response of manufacturers to increasing demand for PPE during the COVID-19 epidemic, Taiwan's textile industry is seeing a strong revival after its decline in recent years due to an exodus of companies, according to Justin Huang, secretary-general of Taiwan Textile Federation.
Source: Focus Taiwan
Photo Credit: CNA
Kai Chiu (kai@taitra.org.tw)