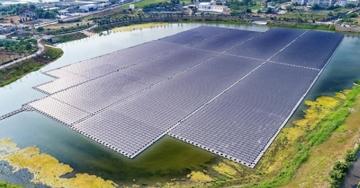 Taiwan president Tsai Ing-wen recently expressed her confidence in Taiwan achieving the goal of producing 20 GW from solar energy by 2025 and declared now is the time to invest in green energy.
The President made the remarks at the opening ceremony for “Energy Taiwan 2018,” the largest renewable energy show in Taiwan taking place between Sept. 19 and 21 at Taipei Nangang Exhibition Center Hall 1.
According to Tsai, energy output from solar power so far this year has reached a capacity equivalent to what a nuclear power plant can generate. It should not be an unattainable objective to produce 20 gigawatts from photovoltaic panels by 2025, reported the Liberty Times.
Tsai also took the opportunity to promote Taiwan’s prowess in environmental technology, as the country has proven during the World Cup with its supply of jerseys made from yarn using recycled PET bottles.
A total of 260 businesses from 11 countries are participating in the energy showcase, the most professional circular economy exhibition platform where wind power, solar power, hydrogen energy, and energy storage techniques converge, noted James Huang, chairman of the Taiwan External Trade Development Council (TAITRA).
Motech Industries, AU Optronics, and TSEC are among the leading players in the solar power industry that set up booths at the showcase event, while offshore wind companies ORSTED, WPD, and prominent German electric utilities company EnBW are also featured in the show, Huang added.
Source: Taiwan News
Photo Credit: Taiwan News
Blake Lin (blakelin@taitra.org.tw)