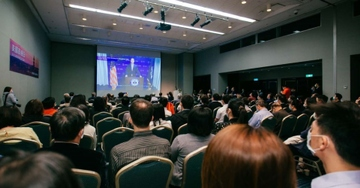 Taiwan's Ministry of Economic Affairs (MOEA) signed memorandums of understanding (MOUs) with the U.S. states of Arizona and New Mexico to deepen bilateral trade cooperation during a virtual ceremony at the opening of the 10th U.S. Business Day in Taipei on Oct. 5.
The U.S. Business Day, co-hosted by MOEA and Taiwan External Trade Development Council (TAITRA), is an annual business event between Taiwan and the United States.
Now in its 10th version, the event is being staged at the Taipei International Convention Center as Taiwan-U.S. business cooperation and partnership ties are at their best point in time, according to a statement issued by TAITRA.
During the two-day event, a series of seminars and symposiums will be held under the Taiwan-U.S. Trade Forum, a dialogue platform designed for Taiwan to make new U.S. trade strategy and for the U.S. to promote information regarding business opportunities from infrastructure projects in various U.S. states, according to TAITRA.
The opening ceremony of the event was attended in person by Cynthia Kiang, director-general of the MOEA's Bureau of Foreign Trade, and Brent Omdahl, the commercial section chief of the American Institute in Taiwan, as well as online by Richard Steffens, the U.S. Department of Commerce's acting deputy assistant secretary for Asia.
As part of the event, Kiang signed a MOU during a virtual signing ceremony with the Arizona Commerce Authority and the New Mexico Economic Development Department, respectively, to deepen bilateral economic and trade cooperation in the semiconductor and information communication technology areas.
Despite the enormous economic damage caused by the COVID-19 pandemic over the past year, trade ties between Taiwan and the U.S. remained tight, Kiang said.
This is evident by the fact that total Taiwan-U.S. trade in 2020 exceeded US$83 billion and the two countries have increased investment in each other's economy, Kiang added.
For instance, U.S. tech companies like Google and Microsoft have increased their investment in Taiwan, while contract chipmaker Taiwan Semiconductor Manufacturing Co. (TSMC) and electronics contract manufacturer Hon Hai Precision Industry Co. have expanded investment in the U.S., according to Kiang.
TAITRA Chairman James Huang said that with the aim of strengthening business investment and trade ties between the two countries, this year's forum will focus on the discussion of topics related to 5G, clean energy, supply chains, and electric vehicles.
According to TAITRA, just several hours after the event, more than 20 American buyers had specified their purchasing needs for products like information communication devices, machinery, metal fasteners, automobile spare parts and components, and bicycle spare parts.
Source: Focus Taiwan
Wayne Lin (waynelin@taitra.org.tw)