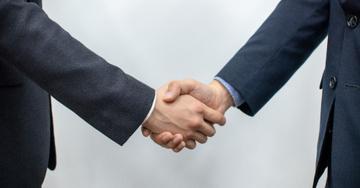 The head of the government-sponsored Taiwan External Trade Development Council (TAITRA), James Huang, met with economic officials from the United States and U.S. business representatives in the Asia Pacific region to promote bilateral economic and trade cooperation on the sidelines of the Indo-Pacific Business Forum 2019 in Bangkok on November 4.
Invited by the American Institute in Taiwan (AIT), Huang led a Taiwanese delegation to the forum co-organized by the U.S. Chamber of Commerce and the Thai Chamber of Commerce, TAITRA said in a statement.
Accompanied by Brent Christensen, director of AIT's Taipei office, Huang met with the United States Under Secretary of State for Economic Growth, Energy, and the Environment, Keith Krach; Deputy Assistant Secretary for Asia at the U.S. Department of Commerce, Diane Farrell; and Executive Vice President of the Overseas Private Investment Corporation (OPIC), David Bohigian, according to the statement.
During the meeting, Huang also thanked several U.S. government agencies for jointly sending a letter to the 500 largest companies in the U.S. to encourage them to invest in Taiwan.
The TAITRA chairman said that under current economic conditions, Taiwanese businesses play an important role in both Taiwan's New Southbound Policy and the U.S.'s Indo-Pacific strategy in terms of restructuring supply chains in the two countries. He called on industries from Taiwan and the U.S. to upgrade through research, development and innovation.
Huang also exchanged views with U.S. officials on the development of economic ties and cooperation in the Indo-Pacific region, according to the TAITRA statement.
He said that cooperation between industries in Taiwan and the U.S. should be promoted from purchasing and production to research, development and innovation. This would not only help transform Taiwanese industries, but also allow them to use Taiwan's strength in the information and communication technology industry to push U.S. world-leading cutting-edge digital technologies into the Indo-Pacific region.
Meanwhile, Krach praised Taiwan's democratic and economic achievements, saying Taiwan is an indispensable economic partner of the U.S. and he was happy to see closer ties between the two countries.
To promote bilateral investment and trade between Taiwan and the United States, TAITRA said in the statement it would set up a Taiwan-U.S. Trade and Investment Networking Center in Taipei in November to encourage greater trade and investment between the U.S. and Taiwan.
In addition, TAITRA plans to set up a sales center in the western U.S. to help Taiwanese businesses seek American partners to develop marketing networks and participate in the Talent Circulation Alliance initiative launched by AIT to encourage the movement of skilled workers between Taiwan and like-minded nations.
The initiative also seeks to cultivate a deep pool of capable research and development and digitally savvy professionals, according to the statement.
Source: FOCUS TAIWAN
Wayne Lin (waynelin@taitra.org.tw)