Renewable energy capacity to grow by 1GW this year 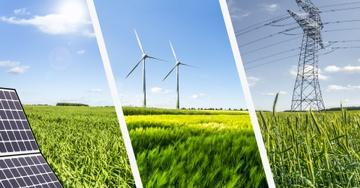 Taiwan expects to add more than 1 gigawatt of renewable energy capacity this year, the Bureau of Energy said.
Three new offshore wind farms are slated for completion or partial operation this year, which would contribute more than 800 megawatts, while a major solar project on Taiwan Sugar Co’s land due to begin operations this year would account for 181 megawatts.
The COVID-19 crisis caused significant delays in renewable energy construction last year, Bureau of Energy section head Chen Chung-hsien said.
“Solar as well as offshore wind farms were affected,” Chen said. “With offshore wind farms, it was far more difficult to mobilize the construction boats due to the crisis.”
German energy group Wpd’s 640MW Yunlin offshore wind farm is slated to be partially completed this year, with more than 400MW to come online, Chen said. Meanwhile, Formosa 2 OWF off the shore of Miaoli, codeveloped by a Japanese-Australian-Taiwanese consortium, is due to be wholly developed, bringing 376MW of renewable energy capacity. Lastly, Taipower Power Co’s (Taipower) 110MW Changhua Wind Farm is scheduled to be completed this year. Currently, there is only one wind farm in operation, the 128 MW Formosa 1 off the coast of Miaoli.
The Ministry of Economic Affairs is expected to announce rules for “phase three” of the offshore wind farm development in the first quarter. Phase three is expected to release 10GW worth of projects between 2026 and 2035.
A solar farm with installed capacity of 181MW built on the state-owned Taisugar’s land on the salt fields of Tainan’s Cigu District is to begin operations later this year, as is a solar project incorporating aquaculture. There will be more joint aquaculture-solar projects to come after the 40MW pilot project in Chiayi, the energy bureau said.
After a controversial Council of Agriculture decision in July last year to limit solar farms on agricultural land and curb joint solar-agriculture projects, the Ministry of Economic Affairs has encouraged solar-aquaculture projects and multi-land-use solar farms to try to meet the government’s quota for total solar capacity, which was missed last year. The original goal for total solar capacity was 6.5GW by the end of last year, however, only 5.82 GW was reached. The goal for the end of this year will be 8.75GW.
By 2025, the Ministry of Economic Affairs aims to generate 20 percent of Taiwan’s energy through renewable means, including 20GW of solar and more than 5.7GW from offshore wind farms.
Source: Taipei Times
Wayne Lin (waynelin@taitra.org.tw)