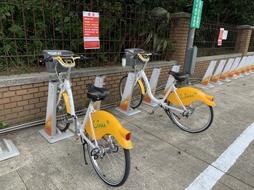 New Taipei will officially launch the "YouBike 2.0," an upgraded version of the original YouBike 1.0 system, in October, the city government said on Aug. 30.
The city's transportation department says contractor Youbike Co., Ltd. will complete approximately 700 stations for the new public bicycle system by the end of the year, according to a CNA report.
In a symbolic gesture, department head Chung Ming-shih helped install a bicycle rack at the city's first YouBike 2.0 station near City Hall in Banqiao on Monday as he announced the upgrade.
New Taipei's YouBike 1.0 system currently has 659 rental and parking stations, which will all be converted to YouBike 2.0, while some new ones will be established, Chung said.
Some of the sites will be near MRT stations, he said, adding that in the long term, New Taipei hopes to have around 1,500 YouBike 2.0 stations.
All of New Taipei's YouBike 2.0 bikes will be interchangeable with the 2.0 bikes in Taipei, while the remaining bikes from the 1.0 system will be interchangeable with those in Taoyuan, Chung said. Riders should note that YouBike 2.0 bikes cannot be returned at YouBike 1.0 stations, and vice versa.
The city’s YouBike 2.0 rental system will be launched on Oct. 20 with 500 to 1,000 bikes, according to the transportation department.
The lack of a common coordinated plan between the New Taipei and Taipei governments for the upgrade has been an ongoing inconvenience for the public and has drawn criticism on social media forums and in news reports since Taipei rolled out the 2.0 system last year.
The botched upgrade plans, along with controversies surrounding 2019 regulations that impeded foreign residents from renting bikes at the time, are among the recent bumps in the road for the bike rental system.
Source: Taiwan News
Alice Huang (alicek576@taitra.org.tw)