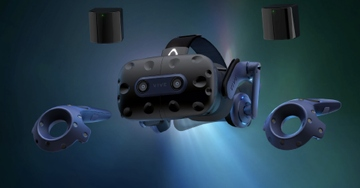 HTC Vive announced it will be holding an event called "Go with the Flow" on October 14 and posted an image of potentially new hardware that will be revealed at the event.
The Go with the Flow event takes place on Thursday, October 14 at 11 a.m. ET and can be viewed online or within virtual reality on the Engage app available on desktop, mobile, or various VR headsets such as the Oculus Quest 2. The company teased a new announcement coming at the event on Twitter.
The picture on Twitter shows a Vive-branded container appearing at about the size and shape of a thermos. While this could just be a container for the actual product, the Vive China President Alvin Wang Graylin said on Twitter to expect "some big news in a small package."
UploadVR pointed out that the company registered a new trademark last month under the name "Vive Flow." The trademark suggests a new headset or controllers and mentions "augmented reality and mixed reality" in addition to virtual reality. The registration page for the event does show what appears to be lenses on the bottom half of the picture.
HTC has already released two new VR headsets this year with the Vive Pro 2 for PC and enterprise-grade standalone Vive Focus 3 headset. While it could be too early to launch another VR headset, there have been concepts of different headsets that HTC could pull from. The Project Proton concept revealed last year envisioned a smaller headset with a combination of VR and AR. There was also the Vive Air leak last April that showed off a consumer-focused standalone headset with a focus on fitness, which could rival some of the best Oculus Quest workout accessories.
Source: Android Central/ HTC CORPORATION
Kai Chiu (kai@taitra.org.tw)