HTC September sales up over 60% from August 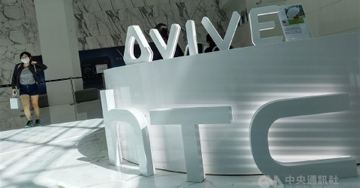 Taiwan-based smartphone brand HTC Corp., which entered the virtual reality business in recent years to broaden its product line, said on Oct. 6 that sales in September surged more than 60 percent from a month earlier following the unveiling of its latest VR headset: HTC VIVE Pro 2.
In a statement, HTC said it posted NT$601 million (US$21.46 million) in consolidated sales in September, up 64 percent from a year earlier, the second highest monthly revenue this year after NT$664 million in June.
However, September sales were still 26.43 percent lower than August, indicating rising competition in the global smartphone market.
In the first eight months, HTC's consolidated sales totaled NT$3.87 billion, down 8.11 percent from a year earlier.
HTC, which launched its first VR headset -- the HTC Vive -- in 2015 and follow up models thereafter, has seen rising demand for its VR gadgets as the global stay-at-home economy boomed.
HTC entered the VR market to help mitigate the impact from escalating competition in the global smartphone market in both the high-end and low to mid-range segments.
The HTC Vive Pro 2, a successor to the original Vive Pro, went on sale globally in early September. The Vive Pro 2 features a 120 degree field of view, 120Hz refresh rate, and "premium 5K fidelity," with 2.5k per eye, according to HTC.
To boost the visibility of its VR development efforts, HTC is scheduled to hold an online "Go with the Flow" event on Oct. 14, when consumers from several locations including Taiwan, New York, Los Angeles and London are invited to attend and enjoy the immersive experience provided by the company's VR technology.
In the second quarter, HTC incurred NT$550 million in net losses, an improvement from net losses of NT$1.02 billion in the first quarter.
HTC's loss per share in the second quarter stood at NT$0.68, compared with NT$1.25 in the first quarter, marking the fourth consecutive quarterly fall in losses.
Source: Focus Taiwan
Photo Credit: CNA
Kai Chiu (kai@taitra.org.tw)