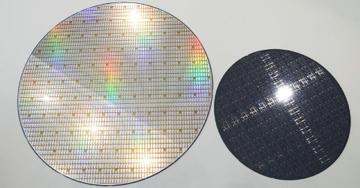 GlobalWafers Co, the world’s third-largest silicon wafer supplier, recently announced a US$800 million deal with GlobalFoundries Inc to supply 300mm and 200mm specialized wafers from its US factory.
The Hsinchu-based company expects to spend US$210 million on capital expenditure in the next few years to expand capacity for the specialized silicon wafers, or silicon-on-insulator (SOI) wafers, at its MEMC facility in O’Fallon, Missouri, the company said in a statement.
The long-term supply agreement with GlobalFoundries, the world’s No. 4 foundry service provider, is one of the biggest deals secured by GlobalWafers.
The two companies in February last year announced their intention to collaborate closely to significantly expand GlobalWafers’ 300mm SOI wafer manufacturing capacity. Yesterday’s announcement signals a significant step forward in their collaboration.
GlobalWafers said in the statement that the 300mm pilot line in Missouri is on track to be completed in the fourth quarter of this year.
The silicon wafers would be used at GlobalFoundries’ most advanced manufacturing facility, Fab 8, in Malta, New York, while the 200mm wafers would be used at GlobalFoundries’ Fab 9 in Essex Junction, Vermont, it said.
GlobalWafers said the SOI wafers would be used by GlobalFoundries to develop semiconductors, as demand increases for advanced radio frequency technologies across a range of applications, including 5G smartphones, wireless connectivity, automotive radar and aerospace.
“We are proud to deepen our strategic partnership with GlobalFoundries, and to expand our important role in the US semiconductor supply chain,” GlobalWafers chairman Doris Hsu said in the statement. “We look forward to ramping up our 300mm pilot line this year.”
Separately, GlobalWafers yesterday posted revenue of NT$4.81 billion (US$173.63 million) for last month, up 10.9 percent from NT$4.33 billion in May last year. That represented a monthly decline of 3.8 percent from NT$5 billion.
During the first five months of this year, GlobalWafers accumulated revenue of NT$24.61 billion, climbing 11.08 percent year-on-year from NT$22.15 billion.
Source: Taipei Times
Photo credit: Bloomberg
Kai Chiu (kai@taitra.org.tw)