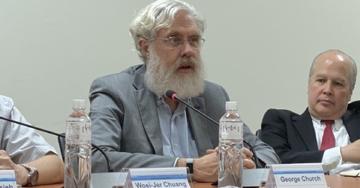 US genetic sequencing pioneer George Church recently visited Taiwan to evaluate whether the nation might join the Personal Genome Project (PGP), saying that more data would help disease prevention and lower the cost of precision medicine.
Church on Monday gave a talk on reading and editing genomes at National Taiwan University’s (NTU) College of Medicine and visited the National Biotechnology Research Park, which is associated with Academia Sinica.
Deemed the godfather of the Human Genome Project — a global research program that provided a working draft of a human genome sequence in 2001 — Church initiated the PGP at Harvard Medical School in 2005, aiming to encourage participants to share their genomic and trait data in a publicly assessable format.
The PGP network thus far consists of Canada, the UK, Austria and China.
Inherited diseases can likely be stopped by sequencing personal genomes, which only costs a few hundred US dollars, compared with up to billions of US dollars decades ago, he told members of the media in Taipei.
The PGP’s ultimate goal is to achieve affordable, high-quality precision medicine by making genome data part of medical databases, he said.
The project network is intended to be a loose confederation, with each participating country operating independently, he said.
Asked whether Taiwan could join the network, Church said that adding the nation would open up interesting possibilities, as the network is about genetic and environmental diversity, as well as innovative ways of looking at problems, and less about a population’s size.
Asked how to prevent genomic data from being used for evil, such as for producing a new virus to use as a bioweapon, he said: “We cannot reassure you that jet airplanes will not be used to destroy buildings.”
The number of viruses discovered through reading human genomes is very small — more worrying is the transmission and drug resistance of viruses, he said.
The visit, Church’s first trip to Taiwan, was prompted by an NTU graduate working as a postdoctoral researcher in Church’s lab, Wu Chun-ting, who suggested that Taiwan might be a good candidate for the network, said Chuang Woei-jer, a medical science professor at National Cheng Kung University (NCKU) and a former director-general of the Department of Life Sciences at the Ministry of Science and Technology.
Members of Academia Sinica, NTU, NCKU, National Yang-Ming University, Taipei Veterans General Hospital and the National Health Research Institutes are forming an alliance for a PGP-Taiwan initiative, Chuang said.
Church has promised to visit Taiwan again in October next year, when he is to sign an agreement with the alliance, he added.
Source: Taipei Times
Rita Chen(rita.chen@taitra.org.tw)