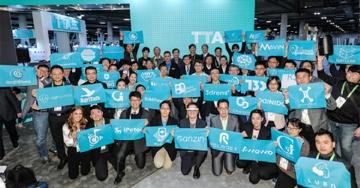 The Ministry of Science and Technology led its second delegation to the Las Vegas gadget show this year, with 44 teams in attendance.

Eight of the 44 Taiwanese start-ups that attended the CES gadgets expo in Las Vegas last week won Innovation Awards, and some exhibitors secured orders worth millions of US dollars, the Ministry of Science and Technology said.

Deputy Minister of Science and Technology Hsu Yu-chin led a delegation to the show on Jan. 8-11, 2019.

It was the second time the ministry has led a delegation to the annual event, with the number of teams growing from 32 last year to 44 this year.

The exhibitors, which develop technologies related to the Internet of Things, information security, smart healthcare, wearable devices and advanced manufacturing, showcased their products at the nation’s Taiwan Tech Arena pavilion in the Eureka Park area of the show, the ministry said.

Taiwan Tech Arena is also the name of an incubation platform that the ministry established in June last year at the Taipei Arena.

Gintel Tech has garnered business opportunities worth US$5 million with its techniques for testing and improving water quality, and Awowo Tech Co. obtained a purchase order worth US$1 million to produce electronic drums, the ministry said.

Business opportunities of about US$4 billion could be anticipated from the teams’ participation in the convention, the ministry said.