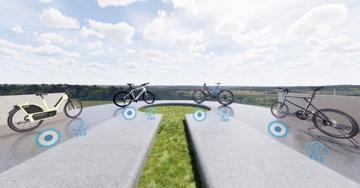 The Taipei Cycle Show and the Taipei International Sporting Goods Show (TaiSPO) are to be held digitally next month rather than on-site.
The Taiwan Trade External Trade Development Council said the exhibition from March 3 to March 31 would allow international buyers to participate remotely using the new digital platform.
The on-site fairs, which were originally scheduled to be held together at the Taipei Nangang Exhibition Center from March 3 to March 6, have been scrapped due to concerns over the spread of COVID-19, TAITRA said.
More than 1,000 booths had been booked for the shows at the exhibition center, but more than 300 companies have signed up to take part in the digital shows.
Bicycle heavyweights, such as Giant Manufacturing Co and Merida Industry Co, as well as chain maker KMC (Kuei Meng) International Inc, bike assembler Ideal Bike Corp, and components suppliers SRAM Corp and Shimaho Inc, will be among the participants.
Gogoro Inc, which develops and sells electric scooters and battery swapping infrastructure, and Johnson Health Tech Co and Dyaco International Inc, two health equipment makers, will also take part in the virtual event, TAITRA said.
About 20 percent of Taipei Cycle Online participants are companies based in foreign countries, including Italy, Denmark, Israel, the US, Japan and Singapore.
Source: Taipei Times
Alice Huang (alicek576@taitra.org.tw)