Cycling Shorts: If you build it, they will ride 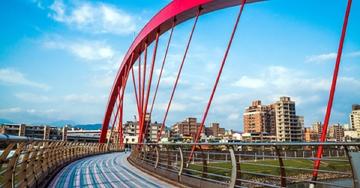 It can be hard to remember now that until a decade ago almost nobody in Taiwan cycled. That this has changed owes a great deal to the if-you-build-it-they-will-come planning attitude of the Taipei City Government in the 1990s.
The first few kilometers opened in 2002 and have been expanding ever since, as have the numbers of users, meaning that groups like Skeleton Crew keep well away on weekends and summer evenings.
Keelung and New Taipei City
Entering Keelung City through a disused railway tunnel marked the cyclists’ easternmost limit, after which they crossed the river and turned back. There being no bike path along the northern bank, the Skeleton Crew followed the road nearest the river, before stopping for brunch in Sijhih District, New Taipei City.
Egg pancakes and soy milks consumed, they continued westward, past Neihu District and Yuanshan, before taking a short detour up Waishuang River. All around them, the riverside park was filling with basketball players, tangoing dancers, taichi practitioners and, of course, increasing numbers of families trundling along on all manner of cycles.
Coffee was taken in the Guandu area followed, after riding the ferry from Tamsui to New Taipei City’s Bali District, by doughnuts. The group then headed southward, past Wugu District and around Sanchong District, before heading westward up Dahan River to Yingge and Dasi districts, their westernmost point.
It was probably around 230 kilometers, less about 20 kilometers of road, giving Greater Taipei a total of around 210 kilometers of almost-contiguous riverside bike paths. Maybe they should ride it again to check, someone suggested, but definitely not on a weekend.
Source: Taipei Times
Alice Huang (alicek576@taitra.org.tw)