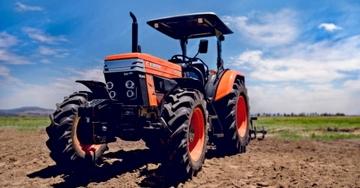 A mobile app aimed at increasing the use of larger farm equipment and pesticide-spraying drones is to become available in the first quarter of next year, Council of Agriculture (COA) Deputy Minister Chen Junne-jih has said.
Recent government measures, including incentivizing farmers to purchase machinery such as mowing machines and tractors, aimed to address labor shortages, but the adoption of such machinery has been low, he said.
The new app would function as a sharing platform, allowing farmers who can operate larger machinery help those who cannot, the council said.
On the app, farmers could register when and where a larger machine was needed, as well as noting other requirements, and machine operators could contact them with their availability, Chen said.
The council has helped to set up six groups of equipment operators that assist local farmers, and is surveying farms about which crops would benefit and what equipment is available, he said.
The council is considering offering the operator groups more subsidies than are offered for farm machinery purchases, he added.
The groups are assisting with Sanxing shallots in Yilan County, grain in Taichung and organic vegetables in Yunlin County, Chen said, adding that the program is to be expanded to Tainan, Kaohsiung, Taitung and Hualien.
The app would also help to coordinate drones used to spray pesticides on fields.
Under the Civil Aviation Act, drone handlers need a permit to fly the drone and a duster permit from the council’s Bureau of Animal and Plant Health Inspection and Quarantine.
About 360 people have completed training courses and obtained both permits, Chen said.
The council said that it is working closely with the Civil Aeronautics Administration (CAA) regarding air safety, with plans for drone handlers to complete every step — from registering flights to uploading flight plans and trajectories — on the app.
Regulations require drone users to register crop spraying six months in advance — longer than the average crop cycle of four months — but the CAA might relax the requirement to three months, the council said.
Crop-dusting drones would use a real-time-kinematic positioning system developed by the council for more accurate field dusting, Chen said.
The positioning system is to be completed by the end of the year and by June next year is to include terrain information such as hills, mountains and forests, he said.
The goal is completely remote operation, he said, adding that the council has cut pesticide amounts in half to prevent it from spreading to neighboring fields.
Source: Taipei Times
Nina Lin (ninalin@taitra.org.tw)