Hualien catches up on MICE 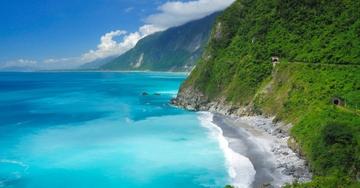 Octavio Peralta, Founder and CEO of the Philippine Council of Associations and Association Executives (PCAAE) and president of the Asia-Pacific Federation of Association Organizations (APFAO), shares his recent visit to Hualien.
I was invited by the Taiwan External Trade Development Council (TAITRA) to make a presentation on Philippine incentive travel at its workshop on meetings, incentives, conventions and exhibitions (MICE) in Hualien. I immediately accepted the invitation for two reasons: one, it will be my first time to travel outside of Taipei City and, secondly, I was confident to speak on the topic, having ample references from the Tourism Promotions Board (TPB), which supports our organization: the Philippine Council of Associations and Association Executives (PCAAE).
Hualien’s name is derived from the word huilan, referencing to the swirling currents of the Hualien River where it meets the sea. On the east coast of Taiwan and the largest county by area, Hualien has a mountainous terrain and has one of the lowest populations, with about 332,000 as compared to Taipei City’s 2.7 million. With its natural beauty, as well as its cultural diversity and friendly kind people, Hualien has become one of Taiwan’s top travel destinations for local and overseas visitors alike. Of late, it is positioning itself as a MICE—destination.
Hualien’s MICE positioning augurs well with TAITRA’s mandate to develop second-tiered cities for MICE and bring more events to destinations other than Taipei, among others. Founded in 1970, TAITRA is Taiwan’s foremost nonprofit trade promotion organization which assists enterprises to expand their global reach. It has a team of 1,300 specialists and operates five local offices and 60 branches worldwide. TAITRA is also among the top 10 exhibition organizers in Asia. Each year, it organizes over 40 professional exhibitions in Taiwan which has been steadily increasing over the years.
Since 2009, the Bureau of Foreign Trade (BOFT) under the Ministry of Economic Affairs (MOEA) has dedicated its efforts to improve Taiwan’s MICE industry. As such, it has mandated TAITRA to manage Taiwan’s MICE promotion program called “Meet Taiwan” to steer its MICE industry to shine on the global stage. Walter Yeh, TAITRA president and CEO, is spearheading this MICE promotional campaign.
Since last year, Meet Taiwan representatives have been making promotional tours to a number of Southeast Asian countries and MICE markets, such as the Philippines, Singapore, Malaysia and Thailand, with good results. This was one of the reasons TAITRA invited me and Anthony Wong, group managing director of Kuala Lumpur-based Asian Overland Services Tours and Travel Sdn. Bhd., to share our insights on the MICE industry in the Philippines and Malaysia, respectively.
For my part, I presented the Philippine National Tourism Development Plan 2016-2022, which was adopted in April 2017 in pursuant to Republic Act 9593, “The Tourism Act of 2009.” I also showed the latest video of our tourism campaign, “It’s More Fun in the Philippines,” and highlighted top MICE cities and destinations outside Manila, such as Cebu, Boracay, Palawan, Bohol, Davao, Baguio and Banaue, Vigan and Laoag, Bacolod, Iloilo and Guimaras.
According to a new report published by Allied Market Research, the global MICE industry size was $805 billion in 2017 and is projected to reach $1.4 trillion in 2025, with a compound annual growth rate of 7.6 percent from 2018 to 2025. So there’s indeed a lot of MICE to catch up on for Hualien!
Octavio Peralta, is concurrently the secretary-general of the Association of Development Financing Institutions in Asia and the Pacific, Founder and CEO of the Philippine Council of Associations and Association Executives (PCAAE) and president of the Asia-Pacific Federation of Association Organizations (APFAO).
Source: BusinessMirror
Wayne Lin (waynelin@taitra.org.tw)